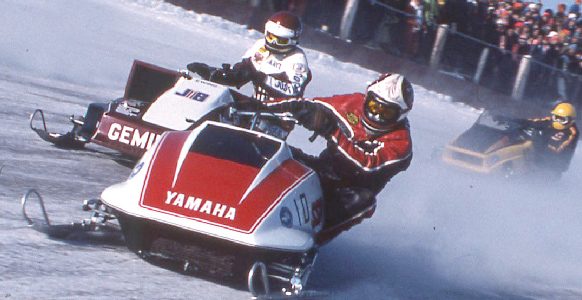 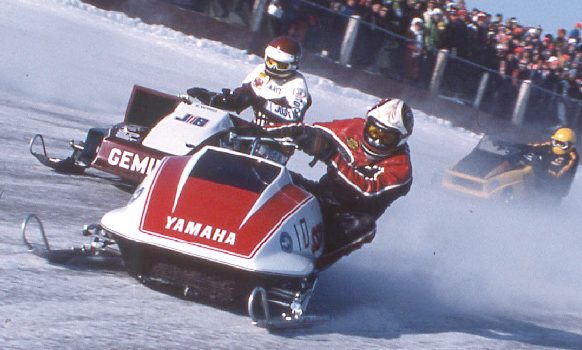 Vintage Rider January 4, 2017 4
By Hal Armstrong – Today we all take independent front suspensions for granted. But, in the spring of 1977, three of the big four...

Today we all take independent front suspensions for granted. But, in the spring of 1977, three of the big four sled builders were working overtime to figure out the intricacies of this new innovation.

SnoPro 1977 was a year for the record books for Polaris. They dominated the season on sleds with not the most horsepower or the lowest weight. What they did have was an independent front suspension that worked and was reliable. Arctic Cat and Yamaha had come into the season with basically the same sled from ‘76 with more power and some minor improvements. Yamaha had won the ‘76 World Championship and Arctic was the defending SnoPro points champion. They soon found out after the first race of the season that their ‘77 sleds were, for the most part, obsolete.

Yamaha entered the ‘77 season with an updated SRX driven by a select number of top independent drivers that were receiving some factory support. Morio Ito from the Yamaha factory returned to North America to race out of the Kalamazoo Engineering trailer. The season was a success in the 440 stock and mod stock division races all over the snow belt, but in the SnoPro classes the results were the opposite. Yamaha’s previous engineering approach to building a fast sled was class leading horsepower with a no-compromise chassis that just met legal weight requirements. Yes, there would be a few unique features, but nothing that sent the other sled builders back home wondering,” Why didn’t we think of that?”

In order to get back into the game, Morio Ito and Tom Marks of Kalamazoo burnt the midnight oil all through late December and January building an IFS chassis for Morio’s 440 SnoPro. The sled debuted on January 22, 1977 in Milwaukee. The sled never won a race, but Morio began to learn valuable lessons about caster and camber changes and that sticking IFS on the front of an SRX chassis does not on its own make a successful race sled. 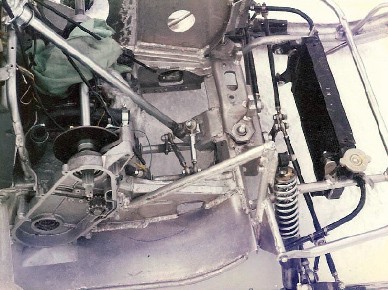 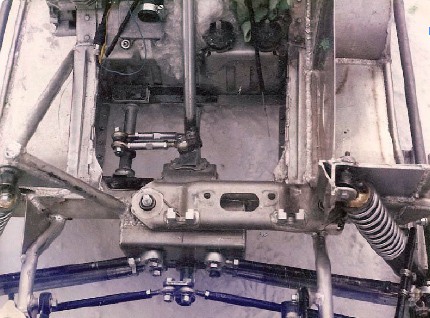 Morio returned to the Yamaha factory in Hamamatsu in March with his hand built SRX which was used as a pattern for the ‘78 SSR, which is arguably one of the sexiest sleds ever built and the first Yamaha factory-built sled with independent front suspension.

Yamaha Gets Serious
The SSR was late getting to the factory team with only pictures revealed of the sled until the team began actual testing in Alaska in November. The machine featured a clam shell hood that covered Yamaha’s version of a trailing arm IFS. Yamaha had taken the Morio Ito’s IFS and refined it, yet the equal length radius rods, steering linkage and trailing arms looked very similar to the dominant 1977 Polaris RXL.

In true Yamaha fashion they did bring some twists. To restrict vertical travel of the ski a limiter strap was installed between the top shock mount and the top radius rod spindle mount. The simple strap was an easy fix to minimize bump steer as the suspension compressed.

In the early days of IFS design, “bump steer” (where the skis travel in an arc as the chassis moves through its travel) was a problem that made the sleds difficult to control. The SSR also came equipped with a torsion bar to link both skis together to reduce body roll while cornering. Top that off with spring rates, shock valving and you had a lot of variables to sort through to get one of these sleds to turn left fast with minimal inside ski lift. And that was just the front suspension!

The SSR also featured a simplified track suspension with no shocks, which was common back in the day on the oval race sleds. Yamaha did have a rear stabilizer arm that had been used on the ‘77 SRX mod sleds. The external stabilizer arm (roll bar) was designed to transfer weight evenly for better traction and stability when cornering. In true Yamaha fashion the sled was built as light as the race rules would allow but the race team was soon to find out that having a high power to weight ratio was great when going in a straight line. The SSR chassis was not rigid in design and would flex under cornering.

Testing in Alaska
Lyle Forsgren (Team Manager) and the race team flew up to Alaska in November to meet their new ride. Lyle remembers, “The first time I actually saw the SSR was in Alaska.”
Frans Rosenquist (Team Yamaha Factory rider) remembers his first experiences on the SSR.”Yamaha had brought the 1976 Eagle River winning SRX to be used as a reference point for the new sled. We would run a few laps on that sled or have a team member ride the ‘76 SRX around the track while I was on the new SSR.This was my first time on an IFS sled so that in itself took some getting used to. My first time on the sled after not riding since last spring was a real shocker. We had about 4 hours of day light and we were there for just a week. I had no idea what to expect so all I had for a reference point in my head was running with the ‘76 sled and thinking back to the ‘77 season. The SSR drove like a tank! It was really darty and you had no idea where you were going with them. I remember that the sleds came from the factory with 20” of carbide. I shortened that to 14” to make it less aggressive and less darty. We had our work cut out for us before the first race in Kinross, Michigan scheduled for December 10th.”

The Race Season
The team did not place in any of the three SnoPro classes that first race. Frans Rosenquist stated, “We were working out of a closed up gas station Yamaha rented while the new R&D building was under construction. While the other teams had engineers back at their race shops working on improvements, we were basically working out of the truck and that small garage in Minneapolis”.

“We were trying to make major changes to stiffen up the chassis, but we did not have time between races to do that. It was not a fun winter. It was a case of having too much to do with not enough time and resources,” recalled Forsgren. “Looking back, we were trying to run in three classes that year instead of focusing on just one class. I think if we had done that we would have been more successful. That would have focused more attention on the 440 class. Yamaha was looking for more exposure on the race track so they opted to build 340cc engines for the factory team only.”

So how could Yamaha go from bang to bust in just one season? Allan Remmel was Fran Rosenquist’s mechanic, and he tells us, “There were a number of issues
with that sled right from the get go. First, the geometry of the front end was not right. It looked like a Polaris but it did not handle like one. We probably had more power but the sleds’ had just too much rolling resistance compared to the others. The new slide rail profile on the SSR created too much drag and the Yokohoma tracks that we used were not as flexible as the Goodyear tracks used by the other teams.”

So why not switch tracks? Remmel recalls that as a factory team they were not allowed to switch out components unless specifically directed by the factory.

Other issues that year were with the new engines. Yamaha had increased the compression on the new piston port two-stroke engines to increase horsepower. Remmel explains, “We were running 110 octane fuel as we had done in ‘77 with no problems. It did not matter how rich we ran them, they were not lasting many races. After we burnt down most of the engines the factory supplied us we finally figured out we needed to run 120 octane aviation fuel. This leaded fuel was not available in the states so we had to purchase our fuel out of Canada. That solved the engine issue. Again, if we would have had the race shop with a dyno we would have figured that one out earlier in the season.”

The highlight of the season was the 1978 World Championship at Eagle River. The team had qualified two drivers, Rosenquist and Morio Ito for the final. Morio Ito’s primary focus for the year was to win that race. Yamaha went as far as building an exact replica of the race track in northern Japan for Morio Ito to practice and focus on machine setup. It had paid off as he had qualified for the race. This would be the last World Championship where all four factories would compete head to head with factory race sleds and drivers. The race was hard on equipment as most of the sleds broke down or crashed. Morio Ito finished 2nd which was testimony to his determination and excellent driving skills.

What Could Have Been
The 1978 season may not have been one for the record books for Team Yamaha but that year would turn out to be important for them as history has shown. Tim Bender burst onto the race scene racing the SSR and actually picked up the only win for Yamaha in SnoPro that season beating the factory riders.

The trailing arm IFS would not return on a Yamaha snowmobile until the 1997 model year with the introduction of the Vmax SX 700. Was the SSR really that bad of a sled? It makes you wonder if Yamaha would have pursued their Telescopic Strut Suspension had the SSR proven to be a winner.