Vintage Rider December 16, 2017 1
The double A-Arm front suspension found on the majority of today’s snowmobiles was not the first choice of IFS used. The trailing arm front...

Arctic Cat Brings it’s A-Game (with some outside help)

Arctic Cat engineer Dennis Zulawski had started work in the late 80’s on a new front suspension design to reduce bump steer as the front suspension cycled through its travel. Bump steer allows the snowmobile to dart from side to side and Zulawski designed and was issued a patent for the first production un-equal length A-Arm front suspension that minimized caster change keeping the ski moving in a near vertical plane.

Arctic introduced their first AWS (Arctic Wishbone Suspension) on the 1990 Prowler. The AWS was a rising rate design, which featured cast aluminum spindles and ball joints used to attach the spindles to the A-Arms. These two components would turn out to be the Achilles heel of the original design, especially in cross-country racing.

Roger Skime (Director of Engineering) had already seen the writing on the wall early in the 1990 season. The Prowler saw limited use in competition as racers rode the 1990 EXT Special, which still used the AFS front suspension. The Prowler was a good trail sled but in the world of cross-country racing, durability and handling shortcomings became evident.

Roger Skime called upon two time I-500 winner and former Team Arctic racer Brian Nelson and his good friend and engineering whiz Hubert Fixsen. Both had a history of developing innovative suspensions for Arctic in the past. Roger needed work to begin on a new chassis that was going to address the Prowler shortcomings and put Arctic Cat back in the winner’s circle. Brian and Hubert were hired as consultants to build a prototype with one stipulation. Don’t come back with a trailing arm front end!

The Nelson/ Fixsen Prototype
Brian and Hubert’s prototype was new from the ground up. It was disguised to look like a 1990 EXT so as not to draw attention when testing was happening on local trails. They set out to build an “Indy killer” with a new A-Arm ski suspension and chassis that would optimize the inherent advantages it has over a trailing arm design. The front suspension geometry was designed with minimal bump steer, scrub, caster and camber change. Brian was adamant that Ackermann steering was also implemented to improve cornering in the tight and twistys and reduce feedback from the skis to the handlebars as bumps are encountered.

Hubert’s design process was “fine tuned” by trial and error with the feedback Brian would provide after testing. This trial and error method continued until Brian put his stamp of approval on it. The new suspension eliminated the tubular shock towers of the Prowler chassis with Fox shocks mounted in a less vertical (laid down) position with 7” of vertical travel at the skis.

A key feature of the new bulkhead was that it was extended to increase the sled wheelbase to improve stability and also increase the center distance between the primary and secondary clutches. The increased belt length reduced belt speed and increased drive belt surface area to reduce belt temperature. This feature is still used on today’s sleds.

The prototype also had additional cooling vents in the hood to increase airflow to the engine. Rider ergonomics took a huge leap forward as the fuel tank was sculpted to allow the rider more freedom of movement when riding up near the tank. This allowed the rider to slide forward and hug the fuel tank with their legs when cornering, and racers learned that to ride fast over whooped out trails the best place was to sit as close to the gas tank as possible. Today’s mass centralized sleds position the engine and rider closer to the center of gravity to minimize rider pitching (up and down movement) when riding over bumps.

Time to Visit Roger Skime
Three weeks later the first prototype was built and Brian and Hubert headed back to visit Roger Skime at Arctic. “We ran the proto against the Prowler and Indy and the results were promising” explained Brian. Kirk Hibbert and Brian Nelson also ran the sled in a couple of races out west that winter with winning results. The decision to move forward with the new design hit a setback that spring when Arctic management decided to try and recoup some of their costs with an updated Prowler (increasing the ski stance and increasing travel to 8-1/2” from 7”) for the ‘91 season. Scrapping a new snowmobile design after one year is expensive.

Disillusioned, the pair put their project aside and waited. As the ’91 race season progressed Team Arctic, even with Kirk Hibbert at the controls, struggled to be competitive in terrain racing. On the ovals the sled was a winner, except the consumer was now becoming more interested in what won on the cross-country and Snocross circuit. The winters of ’91 & ’92 would be long and winless in terrain racing as archrivals Polaris dominated.

The ZR is born
Roger called the guys back to the factory in January ‘92 and told them, “We’re going to build the sled”. Brian wanted more changes, including mods to the rear skid and a hydraulic brake. Brian started working with oval racing legend Steve Thorsen, who had been using Wilwood Brakes on their Formula 3 oval race sleds. Wilwood Brakes, which were common on sprint cars, were less prone to fading under hard use. Brian Nelson remembers, “We were after a brake that we could just touch with your fingers to activate and lock up the track quickly if needed”. 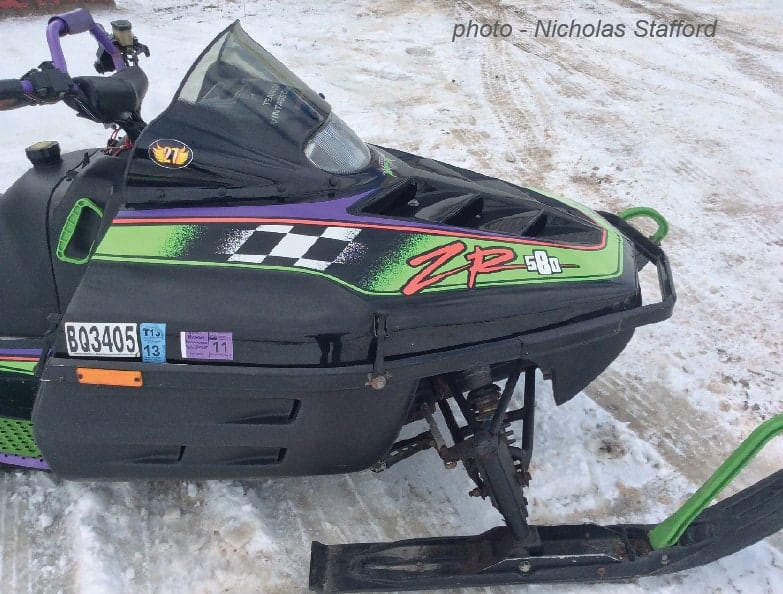 Arctic skid frame guru Tuby Lund designed the rear suspension. The revised suspension spec’d for the new sled was based on the latest Arctic long travel (8-1/2”) suspension. With suspension travel creeping up in the 90’s, issues with excessive track drag was reducing top speed. The rail profile was shortened on the front rail curve to reduce friction and hyfax wear. Fox Shocks (which first appeared on a production snowmobile on the 1990 EXT Special) would come as standard equipment on the new ZR. Kirk Hibbert was given the responsibility of working on the shock valving for the sled. The new skid frame was a torsion spring rear arm with coil over shock on the front torque arm. The name for this new suspension? FasTrack. Only Arctic could come up with a name like that!

Classic ZR Styling
Team Arctic Race Legend Dave Thompson’s sons were responsible for the styling and product engineering once the ZR project was approved. Lonnie Thompson would take the hood design used on the proto and listened to Brian and Hubert’s request for improved aerodynamics and still allow increased airflow through the hood. The fuel tank design was also key for the rider to have more freedom of movement without injuring themselves when riding fast and hard.

The Lonnie-designed fuel tank was a winner and Brian claimed, “It was so much easier on your inner thighs when riding up real close to the fuel tank for extended miles. Lonnie pulled off a great classic design that still turns heads today and is unmistakable Arctic Cat.”

The 440 and 580 liquid cooled Suzuki motors were piston-port designs with Mikuni carbs, typical for this time period. Arctic was using a Comet primary with the Arctic reverse cam secondary. A gun drilled jackshaft and track drive shaft were used to reduce rotational weight and still maintain torsional strength.

Cooling was with two heat exchangers mounted in the front of the bulkhead as is common today and a rear tunnel cooler located adjacent to the snow flap. This design was effective in low snow conditions with the strategic location of the heat exchangers and perfect for terrain racing and light in weight.

Proto to Production to Checkered Flags
Brian Nelson was responsible for taking the proto sled and making sure that the production version was just as good, so we asked him if it was? Brian answered; “As for who put the sled into production it was a combination of groups from suspension, styling, fab shop etc. I would say Kevin Thompson, Product Engineer (the second son of Team Arctic Racing Legend Dave Thompson) at the time had the most responsibility. Roger Skime’s main job was to make sure the production sled didn’t change any or lose anything from the proto. Hubert and myself made many trips to the plant all thru that phaze. I was also involved that fall with a number of test trips to make sure the sled was built the same as the proto. What quite often happens is the production sled gets so many changes thru the summer, a little tweak here and there, that the end product isn’t at all like the original proto. They seem to gain weight, angles and geometry change a little, things like seat foam durometer change etc. So you really have to be careful you don’t lose what you started with. Some guy in drafting might think, why did they build this side panel like they did, I think I will change it just a bit! That happens all thru the proto to production process. We were lucky Roger was there, he didn’t let that happen!”

Racing Dominance
Even though the ZR’s were unveiled in September of 1992, racers did not pick up their sleds until the week before the Duluth Snocross opener. The three years of preparation paid off as the racing debut of the ‘93 ZR caught the competition off guard. The new A- Arm chassis dominated and quickly allowed Team Arctic drivers all winter to beat their Polaris rivals including a win at the I-500 cross country by Kirk Hibbert.

The ZR over the next decade would establish itself as the sled to beat and force the competition to rethink their trailing arm IFS suspensions. Controlled Roll Center geometry and rack steering was integrated into the tailing arm designs. The A-Arm suspension geometry allows the coil over shock to remain relatively vertical during compression resulting in a rising rate design compared to a falling rate on a trailing arm. This design flaw in a trailing arm design resulted in the competition playing catch up. Ski-doo and Yamaha would release new model sleds in 2003 with A-Arm front suspension and Polaris would not be ready until 2005 with their production version

Retrospect
There are only a handful of snowmobiles that have truly been game changers and forever influenced snowmobile design from that point forward. The 1993 Arctic Cat ZR is one of those select few. It demonstrated that a properly executed A-Arm ski suspension was superior to the trailing arm design that had been a game changer in 1980 (Polaris Indy). The 2003 Ski-Doo REV is the most recent game changing snowmobile, introducing rider-forward ergonomics. What will be next? Certainly the days of an OEM contracting two ex-employees to design a new snowmobile is history but most significant improvements (large and small) have come from snowmobilers like you and me. What’s next?

Want more vintage snowmobile stories and photos? You can buy the collector’s edition book bundle from SnowTech Magazine and get all four Vintage Snowmobile Racing books! See below:
Or call 320-763-5411 to order, during Central time hours (9am-4pm, M-F)