2009 Models / Features January 1, 2009 2
Back in the Saddle 2009 marks the return of the performance trail sleds from Polaris. We’re talking the bread and butter, the meat of...

Back in the Saddle

2009 marks the return of the performance trail sleds from Polaris. We’re talking the bread and butter, the meat of the line-up. Last year, Polaris only offered us a 700 IQ, which was kind of a head scratcher. Not to worry, they’ve made up for it by coming with a 600 IQ and the mighty 800 IQ for 2009.
Polaris hard cores will be sure to notice that there are also 600 & 800 Dragon SP models for 2009. This is true. The Dragon SP models are truly a notch higher, mostly in their suspension calibration and capability. But they also cost $700 more than the IQ versions. For the majority of performance trail riders, we believe the 600 & 800 IQ models are a better match, but you do get a lot for the $700 when you step up to the Dragon SPs.
That’s why Polaris smartly offers different levels of performance at different prices. The 600/800 IQ is a prime example; it gives you the latest technology, but does so with a suspension calibration that is better suited to sit-down trail riders. It’s still a high-performance sled, not a cushy cruiser, and surprisingly only slightly less of a mogul-masher than what a Dragon SP is. If you want an even smoother ride, turn your attention to one of the IQ Shift models (with Ryde FX MPV gas cell shocks) that tone down the shock package for better small bump compliance. Gas cell shocks are almost always smoother than high pressure ones, but on the flip side they don’t control the bigger high speed hits nearly as well.
Frequently, riders will ask how the 600/800 IQ differs from a Dragon SP. They’re all IQ models, with the Dragons being white and the IQs black. Like stated above, the shock package and resulting suspension calibration is going to be the single biggest performance difference. Dragons are made for more aggressive riding, able to take on stand-up terrain more so, able to take on higher speeds and bigger bumps. This makes them more of a cross country sled than a trail sled. This is through the Walker Evans Piggyback shocks on the front of the Dragon SP, and a Walker Evans compression-adjustable rear track shock complimented by another Walker Evans shock at center. 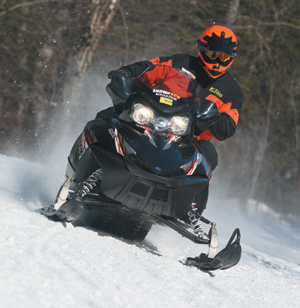