Featured ArticlesNew Models / Features March 29, 2018 1
The Quest to be the Alpha Sled By Dustin Pancheri, SnowTech Mountain The word “revolutionary” often gets overused. Some people use it to exaggerate...

The Quest to be the Alpha Sled
By Dustin Pancheri, SnowTech Mountain

The word “revolutionary” often gets overused. Some people use it to exaggerate without regard to its literal meaning and significance. It’s descriptive of a significant change to the status quo. A change that disrupts what has been considered normal or standard for years. Time will tell but we think it could be applicable when describing the new 2019 Arctic Cat M8000 ALPHA ONE. The general concept of what a standard snowmobile should look like and how it is built hasn’t changed much in the last 25-30 years; two skis, an engine and a rubber track running on two slide rails is what most of us picture and has been such since the early 80’s but the ALPHA ONE is a significant departure from that standard.

Its main differences are found in a completely new rear suspension design. Unlike traditional slide rail suspension designs that have two parallel rails positioned on the outer portion of a track, ALPHA ONE features one single aluminum beam positioned in the center of the track, allowing the track significantly more flexibility to conform with the snow. It’s similar to Arctic Cat’s SVX 450 snow bike suspension (and the Camso DTS 129” snow bike kit) which like the ALPHA ONE supports the entire rear of the machine on a single center mounted monorail. We do know Arctic Cat holds the patent on the single rail design. 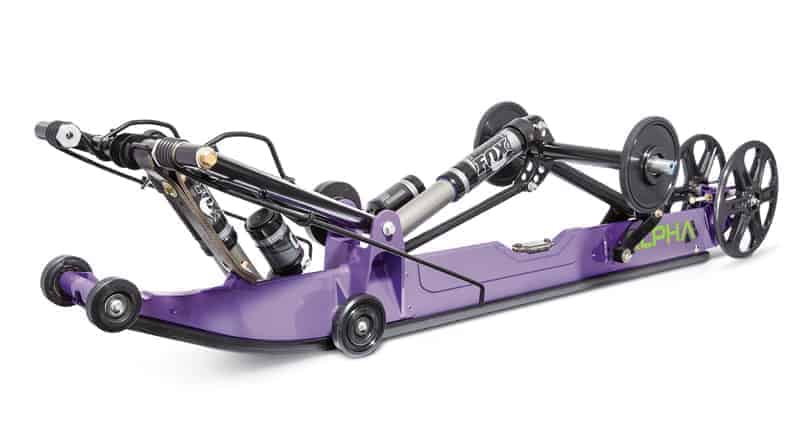 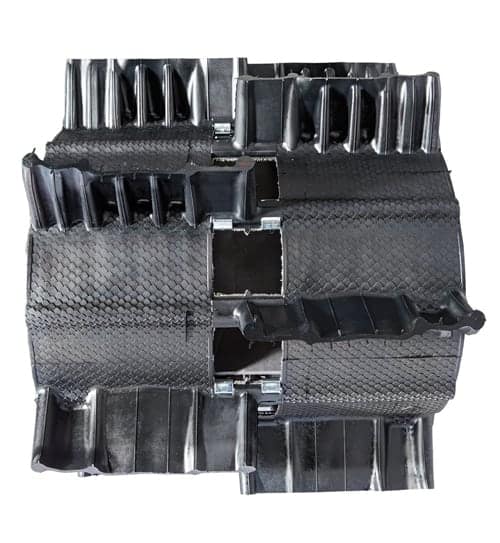 Constructed from extruded aluminum with magnesium attachment points, the ALPHA ONE suspension is 4.5 lbs. lighter compared to its twin rail brother. The newly designed 15” wide ALPHA ONE Power Claw track comes in 154” and 165” lengths with 3” tall lugs. Its unique internal construction and design support the increased flexibility, while its 3.5” pitch aids in traction and a weight reduction of 6.5-lbs. compared to the 3” pitch Power Claw. Arctic Cat also made a slight change the back side of the 3” lug with a slight recess built into the top back side for better traction. Large 10” rear idler wheels ensure maximum efficiency with minimal power loss. Turning a big mountain track takes horse power and Arctic Cat engineers told us that while performing power loss testing that the larger 10-in. idlers were responsible for a significant reduction in horse power loss through the drive train. The result is better traction and more power to the ground.

The single rail design utilizes two hyfax mounted side by side onto two t-slots at the bottom of the rail. The track is designed with one larger single window down the center and contains a single clip mounted to every other window. The clip is shaped with a center divider that fits up between the two Hyfax to keep the track centered on the single rail. This system in conjunction with the larger 10” idler wheels gives the track good stability and prevents it from sliding side -to-side on the rail. 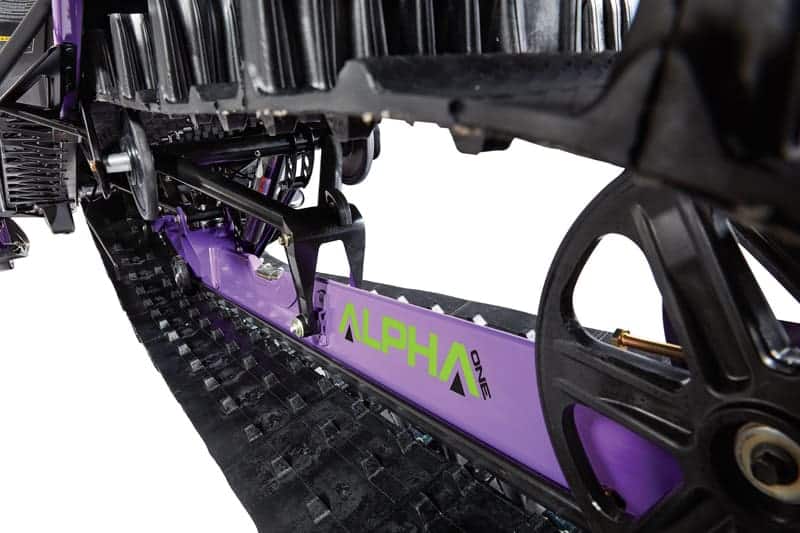 ALPHA ONE utilizes the same Ascender platform and C-TEC2 800 series engine that was introduced last year and is used on the 2019 M8000 Mountain Cat and Hardcore. With one season of long term testing behind us we have been pleased with this combination and how well is has held up and performed. After spending a day on both the 2019 ALPHA ONE and 2019 Mountain Cat we feel that reputation will continue although they both have their own unique feel and handling characteristics. Consumers have never before been offered this many different mountain machines from a manufacturer and while both are amazingly capable mountain machines each will excel in different conditions and this information is important to guarantee you end up with the right machine for your riding style and conditions.

The ALPHA ONE is more agile and quicker responding, especially on the back half of the chassis. In the beginning it was easy to over-ride but we quickly found out how minor changes in weight transfer from one leg to the other will control the machine and do so with less effort (rider input) than other machines. The track has enough flexibility to conform with the changing angles of the snow allowing it to find more traction in uneven snow angles. With the more flexible track the ALPHA ONE initiates a sidehill with very little effort. For lighter riders or even newer riders it is less intimidating than the twin rail version. 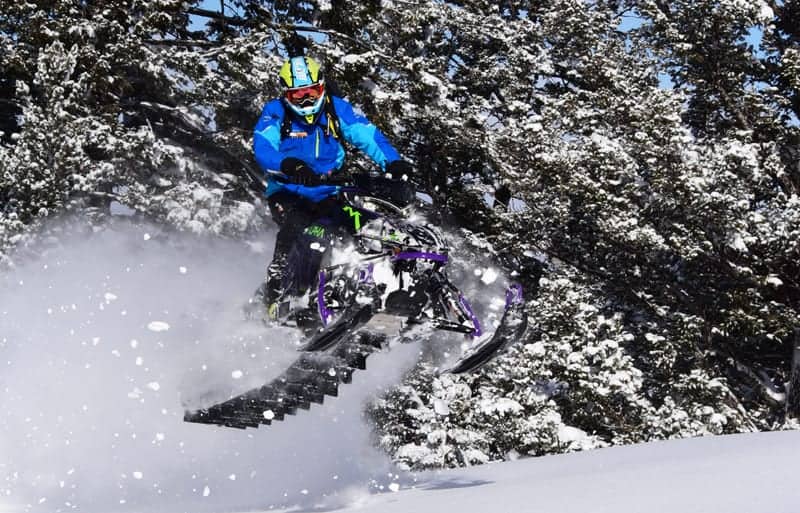 You might be thinking, “Why would I ever ride a Mountain Cat?” The ALPHA ONE is more focused to a specific riding condition making it a bit more one dimensional than the Mountain Cat. This is not a bad thing if you are a rider that stays in those conditions a good portion of the time. The deeper snow will show the true potential of the ALPHA ONE as this is where the extra traction and 3.5-in. pitch really shine. The single rail and minimalist design prevent snow buildup in the backcountry maintaining real world light weight advantages. But what it gains in deep powder performance (agility) it sacrifices on the hard pack trail (stability).

Because the single rail is mounted so far inside the track, ice scratchers must be used on hard pack to supply enough lubrication to keep the Hyfax cool. The ALPHA ONE is supplied with factory mounted ice scratchers that are conveniently and quite ingeniously mounted up out of the way on the front suspension arm. The single center mounted track clip acting as a stabilizing divider between the two Hyfax creates more noise down the trail when compared to the standard twin rail system. The single rail provides less stability down the trail than that of a twin rail system. What this means is that although the ALPHA ONE is capable of on-trail riding to access the coveted deep snow, it is less so than the Mountain Cat. If access to your riding requires significant trail miles or if you are a cross over rider using your machine on the flatlands and out west than consider the M8000 Mountain Cat, M8000 Hardcore or the standard M8000. 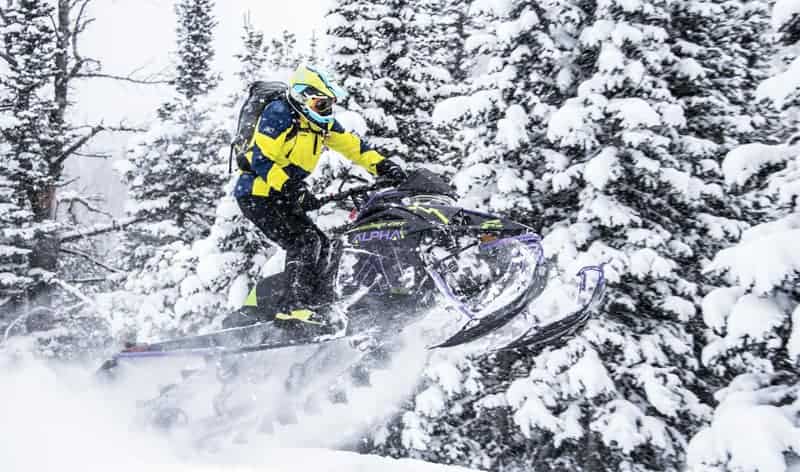 We spent time on both the 154” and 165” versions while switching back and forth with the twin rail 153” and 162” machines. With only one day to ride we were limited to the conditions we could find but the Arctic Cat guys know how to find good snow and found a variety of conditions for us to evaluate each machine. In the deeper lighter snow conditions, the 154” Power Claw supplied on the ALPHA One seems to get better traction than the 153” Power Claw and the same holds true for the 165” vs 162” tracks. The lighter weight of the 3.5” pitch and we suspect the bigger 10” wheels make the track feel a bit more responsive to throttle impute as well. We hope to ride the tracks in a wider variety of conditions this spring to see how they handle heavier and hard pack snow. We suspect that the new undercut track lug will affect how the machine brakes on steep downhills so we are eager to test this as well.

New for 2019, the G2 ProClimb-7 skis feature a new shape with a slightly less aggressive keel. Molded-in foot traction on the top of the skis adds boot traction and usability when needed. The new G2 skis is mounted to the AMS spindle which tapers from 7” to 6.5” sandwiching a rubber dampener to keep the ski tips up and floating on top of the snow while preventing diving or knifing into the snow. A wide ski saddle accommodates a full 2” of lateral ski stance adjustability. While we feel this ski is an improvement over the previous version it’s not a huge change. 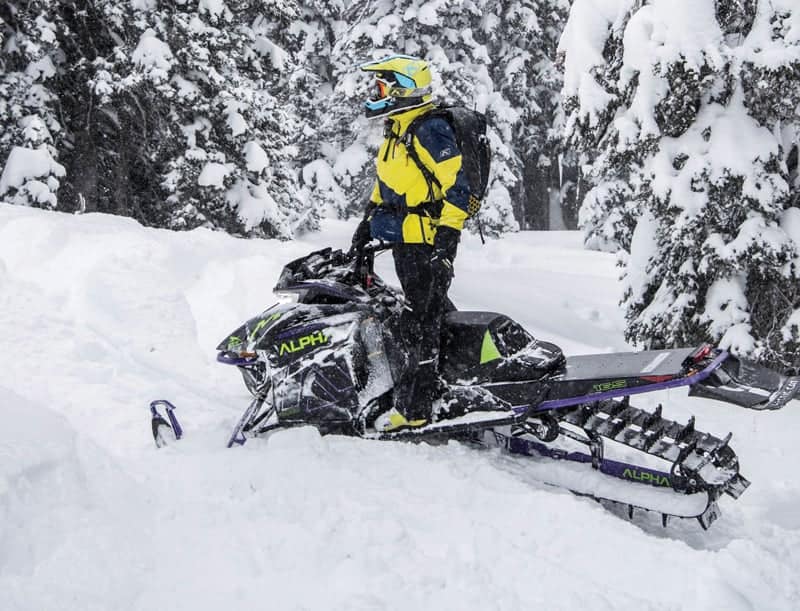 Suspension on the 2019 performs identical to the 2018 although Arctic Cat was still working on calibration and was undecided on the final settings which we may get a chance to ride later in the spring. Ride quality is somewhere in the middle of the spectrum of what the other OEM’s offer. It’s good but Ski-Doo raised the bar with the 2018 Freeride proving what an OEM can do with out-of-the-box suspension if they decide they want to. We know FOX can and has offered this kind of ride quality in the past with their aftermarket calibrations and components, so we hope that Cat will incorporate this into some of the lineup soon.

It’s clear that Arctic Cat was adamant about re-thinking all the details of this machine clear down to small components like the stop switch. We think this really began in 2017 with the introduction of the Ascender chassis and now the final touches of refinement have been applied. Could this new suspension concept be what all deep snow mountain sleds become in the future? If consumers like the look, feel and handling characteristics of the ALPHA ONE, it may force all OEM’s to emulate the same design and feel. Regardless it’s unique and Arctic Cat is thinking outside the box trying to bring new and innovative ideas to the snowmobile world. Electricity, radio, television, cellular phones and the internet all revolutionized the way we live our lives. Could ALPHA ONE revolutionize snowmobiles?