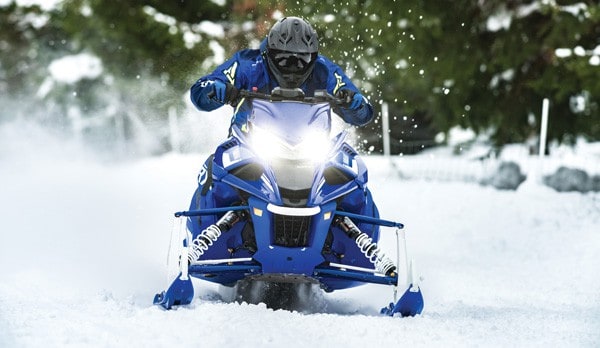 SRX is one name in Yamaha’s history that means one thing – fast, very fast. Aiming to deliver undisputed performance from the frozen lake to the groomed trail, the 2019 Sidewinder SRX LE is a chiseled weapon ready for all challengers. This machine sits lower to the ground, making it a “Lake Racer” calibration focused on unmatched top speed and acceleration. It is what Yamaha describes as being fluid neutral & flat cornering with higher confidence on groomed trails.

Yamaha’s own research indicated many of the 2017 & 2018 Sidewinder buyers wanted the fastest sled, period. That was the primary purchase driver. They cared less about long travel and big bump capability, as many of the Sidewinder buyers placed far greater emphasis on SPEED. Thus, for 2019 you will notice both of the Sidewinder RTX bump sleds are gone and we now have the all-new 2019 Sidewinder SRX, sporting a 137” track length designed for top speed. This thing is a fire-breathing turbocharged four-stroke with over 200 HP, and capable of even more – way more.

The logic to offer such a variation of the Sidewinder is very sound. There are those who must be the fastest out on the lake, and must be faster than all his buddies. You all know someone like this, maybe it is you. This rider does not want to lose. He typically also owns a high-powered boat and a high performance American car, something along the lines of a large displacement V8, not a German car or an import of any kind.

The Sidewinder SRX LE is fitted with a 137” x 15” x 1.00” Camso Ripsaw 1 fully clipped Track. Unique to the SRX is the suspension package with lowered ride height. New dual rate front and center springs provide lower preload with same final force at end of stroke. New torsion springs in the rear also reduce the preload with the same final force at end of stroke. These changes give us equally balanced front and rear suspensions. Having the same end force provides unmatched handling and top speed, without sacrificing comfort or bottoming protection.

Another trick feature is the FOX IQS (Intelligent Quick Switch) Electronically adjustable suspension, used on the front ski shocks and rear arm shock. A handlebar switch allows the rider to vary the suspension calibration automatically. Think of it as a Fox QS3 shock that is adjusted electronically and you have the concept down.

Other features new for 2019 include a new Hayes Brake with a shorty brake lever, a new Race Height Windshield, a new rear axle set up and idler wheel design, and a new tunnel bag.

Before the SnowTech test riders even throw a leg over the seat of a new sled for evaluation, we have a mental impression of what to expect. Much of this comes from 50 years of riding most every new snowmobile every offered, and much of it comes from the thousands and thousands of miles of riding sleds during this time. We take our knowledge of similar, or last year’s models, study the new features and changes and, of course, listen to the marketing presentation and logic from the manufacturer about what the new sled is all about, and how it is going to perform and compare.

And, sometimes you have to throw all of the expectations out the window and just go ride the thing. When we hopped on the new SRX LE the very first time, we had the memories of so many previous SRXs sleds, how could this big 4-stroke even come close?

The 2019 Yamaha SRX LE sleds that we have ridden are, without a doubt, the very best Yamaha 4-stroke sleds we have ever ridden, and they will pretty much blow away any and all of the previous SRX sleds of any year. Not just top speed or straight line acceleration, no sir. Sit down and ride one down the trail, around some corners, blasting down the straights, and you quickly realize what has been missing from snowmobiling for so many years – the slot car. Which so much emphasis on big bump capability, stand up riding and long travel suspensions the sleds have gradually gotten taller and taller and taller. Many of us will remember, fondly, sleds like the 1997+ SX700 and the 1998+ SRX 700. Lower to the ground, precision left and right cornering capability and great all-around performance. Sure, they worked better as groomed trail sleds than they did all-out cross country sleds, but so many riders did nothing but ride groomed trails that they still had enough suspension travel to get the job done, without the sled being tall or tippy. Emphasis was on the flat cornering and handling response, not big bump stroking.

Riding the 2019 SRX LE down a trail with great visibility was one of the great joys of testing the 2019 pre-production models. It was almost shocking how well calibrated this sled was. Like, perfectly dialed to a “T”. Hard to believe it was actually a Sidewinder, it was so impressive. Excellent pitch control, predictable yet precise handling, and power delivery that exceeded all others. Words do not do justice to how good this sled is for the application. Dare we say the single best Yamaha we’ve ever experienced? Probably, and that is no easy task. We still hold the 2002 SRX 700 in very high regard, but it can’t hold a candle to the 2019 SRX LE. The improvement was really impressive, in terms of refinement. We have to suspect the SRX LE was being developed right alongside all of the other Sidewinder models and Yamaha decided to hold this one back for the third model year, which gave the calibration and development teams even more time to hone the calibration and get it dialed in as well as they did. It sure does show.

Now for the good news and the bad news. If you didn’t order one in the Spring, you’re might be out of luck. This machine was only offered during the Spring Power Surge program. That said, there are a few of these gems unsold sitting at dealers, but very few. If you do find one, consider yourself very lucky. Those who did step up to the plate and ordered one in the Spring are truly the lucky ones, as they should be taking delivery of one of the very best running Yamaha sleds to ever be released. All indications are this is going to be the case. Truth be known, all of the 2019 Yamaha Sidewinder sleds we rode were impressive in terms of calibration and running quality, but it was the SRX LE that stood out the most, one of those rare combinations where everything feels just right, a harmony of happiness. When the pre-production sleds we ride in the Spring are that good, run that well, and flat-out impress us like this one did, the production units that Fall are usually spot-on. No being rushed to market, no unresolved calibration issues, no surprises. As it should be.

The 2019 Yamaha SRX LE has a retail price of $17,599 (US) and is going to be available in extremely limited numbers. Yamaha Snowmobiles – https://www.yamahamotorsports.com/snowmobile