HOT Products January 4, 2016 0
CMX started building sleds in 1991 because they knew they could build a better snowmobile for back country mountain riding than what...

CMX started building sleds in 1991 because they knew they could build a better snowmobile for back country mountain riding than what the major manufacturers were producing. High-quality, high performance, light weight, efficiency and reliability were, and still are, their goals for building Crazy Mountain Xtreme (CMX) snowmobiles.

CMX is now pleased to introduce their latest creation – the Crazy Mountain Xtreme Bike Kit (CMXBK). They are applying the same fundamental practices building these kits as they do their CMX Snowmobiles. CMX never looks for the cheapest parts to build their products, instead they look for the best parts. They build things the way they want them for their own use, because they ride them and they want the best. They want their units to be true, straight and in alignment, rigid, durable and built to last, properly engineered and built. 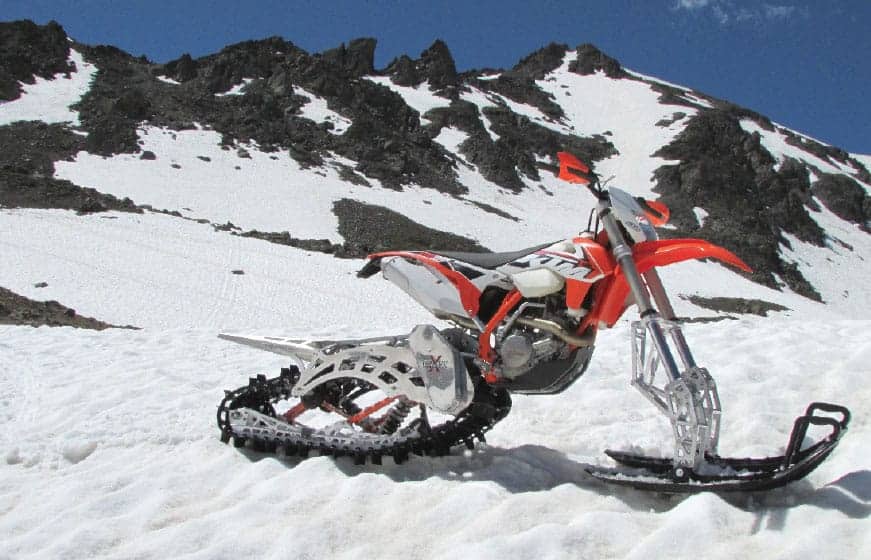 Just like with the CMX snowmobiles, they are building the CMX Bike Kit for back country mountain riding. This is why the CMX Bike Kit looks more like a snowmobile with motorcycle mounted in the middle (2 skis up front and a track in the rear). The CMX R&D team learned that mounting the track system as far forward as possible is a huge advantage. By having the chassis mounted further forward, it puts the rider weight in a better position, which greatly improves handling.

The chassis assembly is built from CNC machined aluminum parts. This design and manufacturing procedure lends itself to a very high level of precision. The bike adapter itself is made from 1-1/4” thick billet aluminum. The adapter mounts to the motorcycle, and the CMXBK chassis mounts to the bike adapter. This allows for multiple mounting positions. Different bikes with different style of rear suspensions will dictate how far forward the CMXBK chassis can be mounted and still maintain clearance between the track and the frame. The CMX Bike Kit was designed to have a compliant link rod (not rigid mounted to the bike). By using a polyurethane bushing in the end of the link rod, it allows for movement between the CMXBK chassis and the bike in the event of the rear suspension bottoming out. The link rod is aluminum tube and has left hand threads on one end and right hand on the other, so it can be adjusted without removing it.

IceAge/CMX rails combined with correct rear suspension geometry provide a very shallow attack angle, which will improve the ability to get up on the snow. This geometry also maintains perfect track tension as it goes through its travel. The rear suspension with a scissor-style rear torque arm will soak up the bumps as well as provide transition to lift the front-end for a very light feeling, playful riding style. Raptor Performance coil-over shocks are the only shocks used on both the CMX Bike Kit as well as the CMX sleds.

The Raptor Performance X2 front suspension is standard equipment for the CMX Bike Kit. CMX tested the X2 twin ski design in April of 2014 and knew it was a home run. The control and confidence that it gives the rider is amazing. CMX worked closely with Raptor to perfect the ski design for this system. It utilizes two 7” wide skis. First-time riders can run top gear on the trail the first day of riding. Off-trail riding is even better. It holds a side hill better than any other ski and you can dive into a downhill carve and not have the front-end push out. There is also very little drag with the twin ski design, so it increases performance as well.

CMX built the first belt drive system to be used on a production built snowmobile in 1999 and also offered it in kit form for all brands of snowmobiles. They realized the performance benefits of a belt drive system over a chain drive system with the very first one they built. The belt drive system on the CMX Bike Kit is the best one they have built to date. Starting with a clean sheet of paper, the 1/2” thick CNC’d aluminum plate that bolts to the side of the chassis not only houses the belt drive system, it also adds rigidity to the chassis. They chose to run a right side drive for the secondary drive to create a more balanced system. The hubs on the jackshaft that the bearings ride on are 9.3” from bearing to bearing. This balances the load to the track that starts at the countershaft sprocket on the bike. It also puts less torsional load on the chassis and bearings because it carries the load on bearings that are 9.3” apart. The aluminum trackshaft has a 1-1/8” hex. The jackshaft and the trackshaft are one-piece units made from 7075 T6 billet aluminum. This means the hubs that the sprockets and brake disc mount to are part of the shaft. Because the sprockets and brake disc bolt directly to hubs, the design eliminates the need for splines. This also eliminates the problem of wear that takes place between sprockets and shafts with splines.

The entire team (engineering, machine, fabrication, welding, assembly and test pilots) at CMX put a lot of thought into the design of the CMX Bike Kit and are very proud of what they have to offer. So much so that they want you to ride one to discover the difference first hand. Kits are available to fit most any of the current off-road bikes in three lengths, ranging from 120” at $6,495 to 129” for $6,795 and 137” at $7,295. Get your orders in now for earliest delivery. Contact Crazy Mountain Motorsports Inc. at 406-686-4921 or info@crazymtn.com to learn more, or visit
www.crazymtn.com. 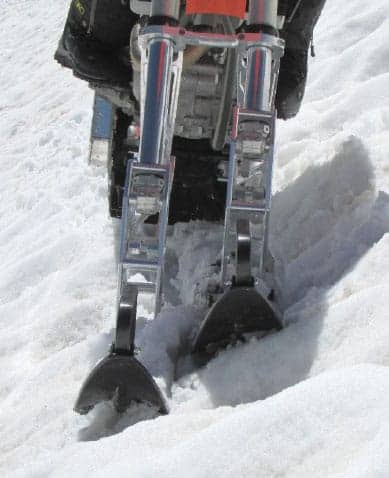 One of the unique and game-changing features of the CMX Bike Kit is the use of two 7” wide skis. The X2 dual-ski system maintains even contact between the control surfaces and the snow. As you turn, the skis tip but the weight on the inner ski compresses the fork leg and the outer fork leg extends, maintaining contact with the inside of both skis, giving the rider a very comfortable and confidence inspiring feeling of control. This advantage of control is even better for off trail back country riding. The X2, with two 7” skis (14” total) provides better floatation and also packs the snow for the track.

In contrast, when using a single 10” ski with the rake of motorcycle forks, as you turn it moves the point of contact from the center of the ski to the wear bar (on the edge of the ski) that is 5” away. When this occurs, you are actually fighting the steering because you are lifting the front end of the machine. The ski wants to stay flat and go straight. The feeling of that transition is very scary, especially for newer riders. This is most evident on harder snow or groomed trails. Riders with injured or weak shoulders especially have a hard time because it requires a lot of effort.

Subscribe to SnowTech and have every issue mailed right to your door, 5 times per year!