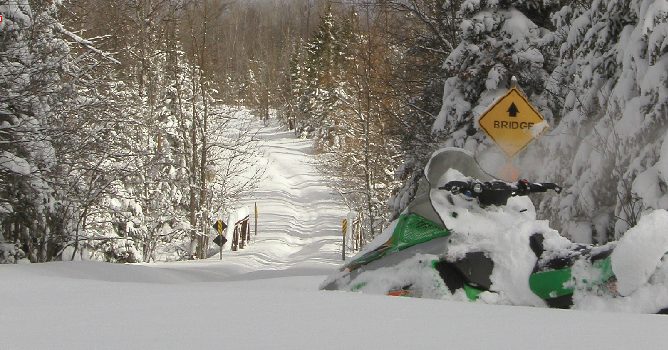 Featured Articles February 18, 2018 0
One of the most wonderful experiences for a snowmobiler is to wake up to a foot or more of fresh snowfall. The chances of...

One of the most wonderful experiences for a snowmobiler is to wake up to a foot or more of fresh snowfall. The chances of this happening from a low pressure system passing nearby are one thing, but the chances of this occurring just because a cold wind blows is quite another. That is the beauty of lake effect snow – it can happen with a cold wind (and other factors) instead of having to wait for a low pressure system to pass. Lake effect snow events can be quick, or they can last for days, with some of the most incredible snowfall rates and totals possible. 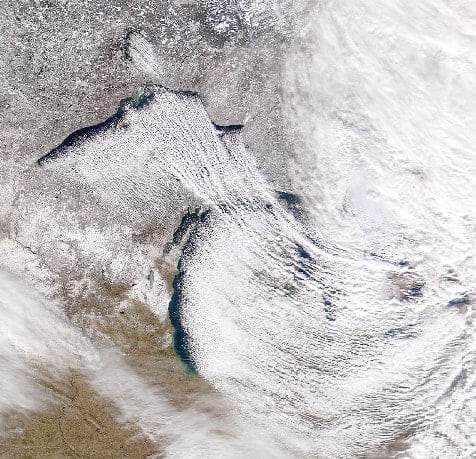 More accurately, lake-effect snow is produced during cooler atmospheric conditions when a cold air mass moves across long expanses of warmer lake water, warming the lower layer of air which picks up water vapor from the lake, rises up through the colder air above, freezes and is deposited on the leeward (downwind) shores. Lake-effect snow can cause blinding whiteouts in just minutes, and some storms can last days.

The same effect also occurs over bodies of salt water, when it is termed ocean-effect or bay-effect snow. The effect is enhanced when the moving air mass is uplifted by the orographic influence of higher elevations on the downwind shores. This uplifting can produce narrow but very intense bands of precipitation, which deposit at a rate of many inches of snow each hour, often resulting in a large amount of total snowfall. 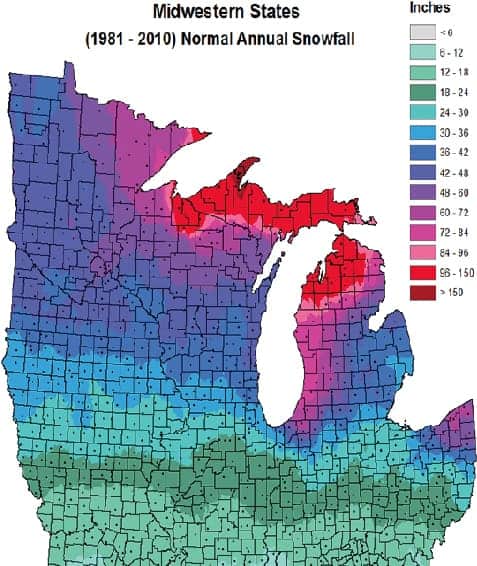 The areas affected by lake-effect snow are called “snowbelts”. These include areas south and east of the Great Lakes, the west coasts of northern Japan, the Kamchatka Peninsula in Russia, and areas near the Great Salt Lake, Black Sea, Caspian Sea, Baltic Sea, and parts of the northern Atlantic Ocean.

Cold winds in the winter typically prevail from the northwest in the Great Lakes region, producing dramatic lake-effect snowfalls on the southern and eastern shores of the Great Lakes. This lake-effect produces a significant difference between the snowfall on the southern/eastern shores and the northern and western shores of the Great Lakes. The most affected areas include Upper Michigan, Central New York, Western New York, Northwestern Pennsylvania, Northeastern Ohio, southwestern Ontario and central Ontario, Northeastern Illinois (along the shoreline of Lake Michigan), northwestern and northcentral Indiana (mostly between Gary, IN and Elkhart, IN), and western Michigan. 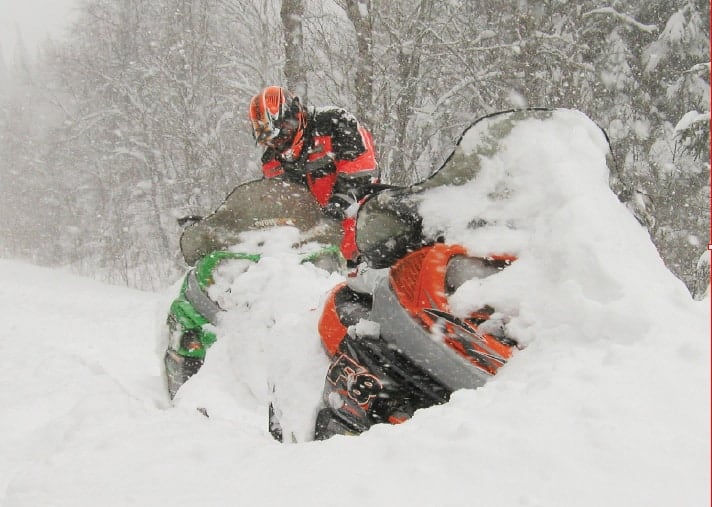 Upper Peninsula of Michigan
A very active snowbelt in the United States exists on the Upper Peninsula of Michigan, including the cities of Houghton, Marquette, and Munising. These areas average 250 – 300 inches (635 – 762 cm) of snow each season. For comparison, on the western shore, Duluth, Minnesota receives only 78 inches (198 cm) per season. Lake Superior and Lake Huron rarely freeze because of their size and depth; hence, lake-effect snow can fall almost continually in the Upper Peninsula and Canadian snowbelts during the winter months. Main areas of the Upper Peninsula snow belt include the Keweenaw Peninsula and Gogebic, Ontonagon, Baraga, Marquette and Alger counties, where Lake Superior contributes to lake-effect snow, making them a prominent part of the Midwestern snow belt. Records of 390 inches (991 cm) of snow or more have been set in many communities in this area. 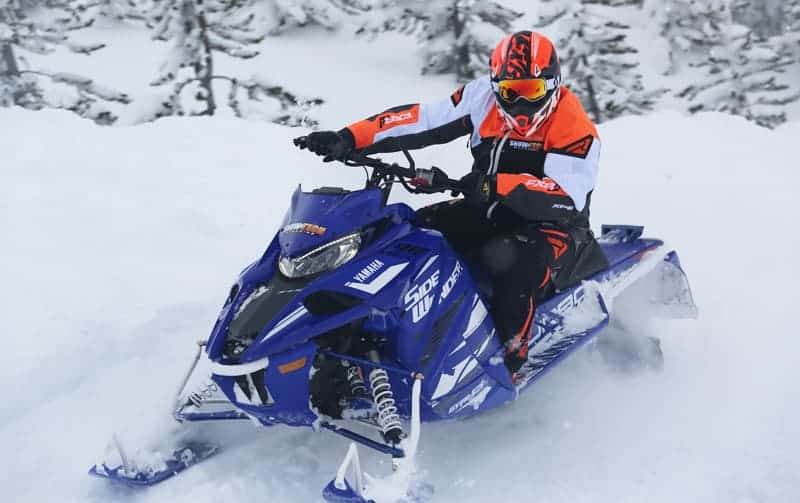 Jutting north-northeast into Lake Superior, the Keweenaw Peninsula is surrounded by water for all but a few degrees to the south, able to receive snowfall anytime the cold wind blows from most any direction except due south and south-southwest. The Keweenaw Peninsula averages more snowfall than almost anywhere in the United States – more than anywhere east of the Mississippi River and the most of all non-mountainous regions of the continental United States. Because of the howling storms across Lake Superior which cause dramatic amounts of precipitation, the lake-effect snow makes the Keweenaw Peninsula the snowiest place east of the Rockies. Only one official weather station exists in this region. Located in Hancock, Michigan, this station averages well over 210 inches (533 cm) per year. Farther north in the peninsula, lake-effect snow can occur with any wind direction. The road commission in Keweenaw County, Michigan collects unofficial data in the community of Delaware, and it strictly follows the guidelines set forth by the National Weather Service. This station averages over 240 inches (610 cm) per season. Even farther north, the ski resort Mount Bohemia receives an unofficial annual average of 273 inches (693 cm). A station in Herman, Michigan, averages 236 inches (599 cm) of snow every year.

Ontario
Further to the east, Southwestern Ontario is surrounded by water on three sides so many parts of Southwestern and Central Ontario get a large part of their winter snow from lake-effect snow. This region is notorious for the whiteouts which can suddenly reduce highway visibility on the world’s busiest highway (Ontario Highway 401) from clear to zero. The region most commonly affected spans from Port Stanley in the west, Brantford and the Bruce Peninsula in the north, Niagara-on-the-Lake to the east, and Fort Erie to the south. The heaviest accumulations usually happen in the Bruce Peninsula, which is between Lake Huron and Georgian Bay. So long as the Great Lakes are not frozen over, the only time the Bruce Peninsula does not get lake-effect snow is when the wind is directly from the south.

Tug Hill Plateau
Lake-effect snows on the Tug Hill plateau (east of Lake Ontario) can frequently set daily records for snowfall in the United States. In February 2007, a prolonged lake-effect snow event left 141 inches (358 cm) of snow on the Tug Hill Plateau. Tug Hill receives, on average, over 20 feet (240 in; 610 cm) of snow each winter, nearly equal to and some years greater than the annual snowfall in the Keweenaw Peninsula in the Upper Peninsula of Michigan.

Great Salt Lake
The southern and southeastern sides of the Great Salt Lake in Utah also receive significant lake-effect snow. Since the Great Salt Lake never freezes, the lake effect can influence the weather along the Wasatch Front year-round. The lake effect largely contributes to the 55 – 80 inches (140 – 203 cm) annual snowfall amounts recorded south and east of the lake, and in average snowfall reaching 500 inches (13 m) in the Wasatch Range. The snow, which is often very light and dry because of the semi-arid climate, is referred to as “The Greatest Snow on Earth” in the mountains. Lake-effect snow contributes to approximately 6–8 snowfalls per year in Salt Lake City, with approximately 10% of the city’s precipitation being contributed by the phenomenon.