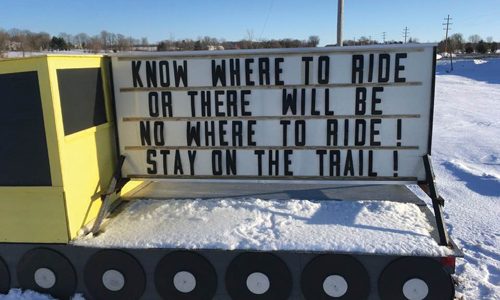 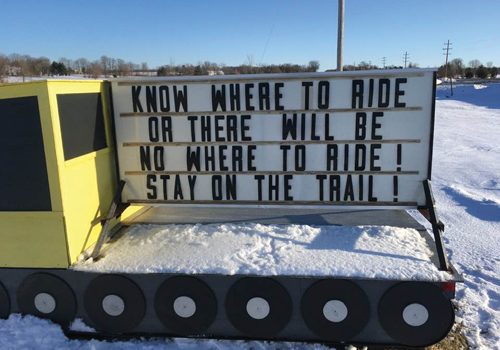 Editor's BlogEditorialsKevin Beilke January 15, 2022 1
Ask most anyone involved with the creation and maintenance of snowmobile trails on private land and they will tell you the biggest threat to...

Ask most anyone involved with the creation and maintenance of snowmobile trails on private land and they will tell you the biggest threat to our interconnected trail system is trespassing. Snowmobile riders, more and more each year, venture off the groomed path in places where it is strictly forbidden. Like, illegal. Those who create the trails simply do not understand why there is such disregard, such disrespect, and such a casual attitude towards protecting and preserving what we have worked so hard to create over the past 50 years. It escapes common sense and logic.

I’ve been working on this issue for several years now. Thought it would be an easy subject to tackle, but it is much bigger of an issue than I first thought. It is actually a study of human behavior. There are so many reasons we have those who ignore the rules, like trespassing. Kind of like risk assessment behavior, there are so many rationales. Some don’t know it is illegal. Some know but don’t care. Some know but don’t think it matters. Some figure there are no consequences. Some believe they are entitled. It is all over the map.

An alarming number of snowmobilers just do not see the problem. They truly believe what they are doing is a victimless crime, and therefore not a “real” problem. At least until they come back and find that trail is permanently closed. Some are locals, some are tourists. Some are young, some are old. Some are on trail sleds, some are on backcountry sleds. While we might be able to make some generalizations about those most likely to be offenders, it is not as clear cut as you might think or want it to be. One thing is for sure – fresh, untracked snow is too great of a temptation from some people to resist. Like the comedian Flip Wilson used to proclaim, “The Devil made me do it!” is about the only justification that makes sense. An inability to resist temptation. This alone should scare the hell out of us as a user group, as it paints a bleak future, indeed.

People like to ride their sleds in fresh, untracked snow, I get that. We all like doing that. But doing it in sight of the groomed trail is not the place to do so! Taking your sled off into the fresh snow needs to be done away from the groomed trail system, but if you don’t know how to get there or find that opportunity then we have a problem.

There is no silver bullet when it comes to a solution. Trails get closed and re-routed when the land owner finally gets fed up with people ignoring their wishes, trampling their crops and disrupting their livestock. The reason is actually irrelevant, as it is up to the good will of the land owner to let us route a trail on their land. If we can’t appreciate what they offer, then we can go to hell. Maybe if more of the offending riders had to stand there and listen to the landowner throw us off their land then they’d start to understand. We beg and plead for one more chance, one more time, but they’ve been snookered once too many already and we are told to pull the signs, shut the gates and go elsewhere. Trails that have been in place since the 1970s are being closed. Fact. Just had one less than a mile from where I live. I will never again ride that section. If I could catch the hooligan that screwed this up I would love to have a few words with them.

First we need to make everyone aware of what actions are legal and not legal. (education)

Next we need to provide accurate data on what locations are legal and not legal. (signs, maps and screen data)

Then we need to have consequences for violation. No consequences, no change. (enforcement)

Often times it comes down to riders being lazy. They are too lazy to figure out where to go and how to get there. They just see the fresh open space next to the trail with no tracks and want to be “that guy”. Doesn’t matter if there are “Stay on Trail” signs, it’s like they don’t read English. Since we know they do, we can only conclude it is simple ignorance or entitlement.

Personally I believe the most damaging is the entitlement attitude, they do not respect the concept of private ownership and property rights. Public or private, does not matter to them. They truly believe they are entitled to use it all, like it should all be under common ownership, or communism. Maybe this is the scariest part of all.

Some riders think we, the industry, the trail clubs, the state, should show them where backcountry riding can be done and how to get there. Just hand it to them on a silver platter. This also plays into the lazy argument, they are too lazy to study maps and learn the laws, too lazy to do some exploring and find their own little stash back in the woods. Anyone who rides out west knows this is part of the thrill, finding the little meadows and play areas that nobody else has been back into yet. Trust me, it isn’t right next to the groomed trail!

Bottom line, there is no single solution to the problem, simply due to the multiple causes and attitudes. Some do not know any better. Some know, but do not believe the risk is great enough. Some know, but do not care. And, some believe it does not apply to them, that they are above the law, above the need to respect others. This is not a problem with snowmobilers, but with society as a whole, and that is a completely different problem.