The Winds of Change

Editor's BlogKevin Beilke August 31, 2011 0
It is always exciting to see the weather change from the hot humid days of summer to the cooler mornings of late August and...

It is always exciting to see the weather change from the hot humid days of summer to the cooler mornings of late August and early September. Just this past week we were up in the Western U.P. of Michigan (a great place to vacation in the summer as well as the winter) and the one morning when we woke up it was only 39 degrees out. For some strange reason my thumb started twitching, must be a reflex or something. The days start to get shorter, the air gets dryer and cooler, and the one that really gets me excited – some of the new sleds start to show up at the dealerships.

Driving past an Arctic Cat dealer this week we noticed a brand new 2012 PRO-CLIMB sled sitting there. Damn near drove off the road as my head cranked around. Everyone in the car thought I must have seen a naked lady or something by my reaction. Even though I have seen and ridden various forms of prototype Cats last winter, to see an actual production sled sitting out in front of a dealer was still thrilling. OK, maybe I’m not normal, at least that’s what most people tell me, but we’re snowmobilers and by that alone we’re not normal. We’re unique and different. Think about it. We get excited when several feet of snow fall and we get to go outside for an entire day in sub-zero temperatures, and enjoy it. We actually look forward to it. That’s not normal.

Or maybe it’s the countdown that starts right about this time of year. I like to post a great big number on the wall that shows how many days are left until December 1st. That’s the day the trails (could) officially open in Michigan and Minnesota, where we do most of our riding and testing. Once we get down to about 100 days the countdown begins. On August 31st you have 91 days ‘till December 1st (30 days in September, 31 days in October and 30 days in November). 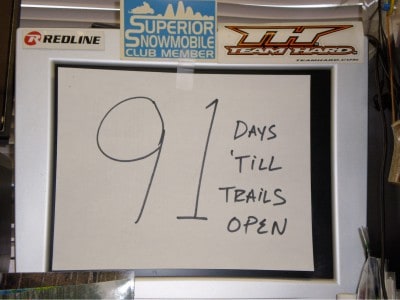 That means any service work that needs to be done that takes time should get on the schedule. Shock rebuilds are going to need to get done. Time to order hyfax and wear bars so we get them before the stock runs low. Time to get enough oil to last the winter. Order the windshields and whatever else we need for accessories.

And then the best part – the new long term test sleds start to show up. We maintain a fleet of several long term test sleds, with eight to ten brand new sleds each and every winter, along with the stable of “measuring sticks” – sleds that are carried over from the year before, or many years, because they are too good to let go. We keep them around to compare the new sleds to so we can be sure as to how good they all are (or in some cases how they do NOT measure up to the hype).

I’m sure you’re curious as to what we plan on testing all winter long – the 2012 Long Term Test Sleds. We hope to have one of the new Ski-Doo MXZ X-package sleds with the rMotion rear suspension in it, with a 600 E-TEC. This rear suspension was most impressive during early testing, able to go through rougher terrain faster and with less disruption than any other sled tested. For our long-distance trail riding we hope to get our hands on one of the Ski-Doo GSX SE sleds with the 800R E-TEC. This was a sleeper in spring testing, super capable and so very comfortable, a groomed trail riders delight. All BS aside, this sled was unbelievable and hardly anyone knows about it.

Then we have those horny-looking new Arctic Cats. The longer tracked XF Turbo SnoPro is high on our list, as was an XF 800 two-stroke. Maybe an F 800 in a shorter track. They’re all going to be good runners for our type of riding. The riding position is perfect, steering light, ride quality what we expect from Cat – smooth and compliant.

Yamaha is most likely going to see a RS Vector of some sort head our direction. We had an Apex SE last winter, and it was the best Yamaha we’ve had in a number of years. With the addition of power steering to the RS Vector it is the logical choice for us to stay on top of the new and different.

Polaris has a new Switchback for 2012, several of them. The RUSH models have been somewhat lacking the past two seasons, great bump sleds but they still pushed through the corners, something they seem to have gotten better at for 2012 now with the suspension changes. But we like long tracks, so we hope to do some testing on a Switchback Adventure (really the only high-performance groomed trail sled they offer) and maybe a Pro-R 800 Switchback to keep up (or try to) with the XF Turbo.

That’s about all for now from SnowTech central. We’re sorting through the information trying to give you another great magazine full of unique perspective and inside information so you can better enjoy the sport and to help you make more informed decisions. The October-November issue comes off the press in late September so subscribers should get it by the end of September and into the first week of October, and it always takes longer for them to get into the far reaches of Canada. We hope you enjoy reading it as much as we enjoy preparing it. Ride on.